After Amelia’s comment on the second opening night of WITHIN / WITHOUT, I decided I had to make some changes.

Instead of a single long piece, I chose to go for the easier option and go with separate images for the separate pages. I’d been doing concept drawings in my sketchbook and it only made sense for each one to just be on a separate piece of paper, but still, adamant that they should be suspended on strings, rather than just hung on a wall.

Quite a few things changed throughout the course of this project. From illustrating different Creation myths in order to point out similarities to making an animation uniting all their main elements, to a long continuous piece hinting at a multiverse… I have finally come to a final decision.

My plan is to create an installation of the timeline of our universe but backwards. First we observe what is now, the Earth suspended in space, and then we start going further and further backwards until we reach the point of the Big Bang, the point of primal genesis, the point beyond which we can’t tell what was. Then I will employ the multiverse bubble theory and we will move out of the bubble our universe’s timeline is contained within, to the space where all the numerous bubbles float about, each one containing the possibility of a universe within it… they hang freely until they lead to another freely hanging piece, the last bit of the installation, a mirror. Next to it a short poem tying everything together and inspiring the awareness, self-consciousness and empathy we al must feel towards our world, our planet, our home, and all the beings inhabiting it alongside us.

It is our world, our choices and our responsibility.

I’d been doing a lot of concept pieces before and after the exhibition in Bristol and when I came to a final decision about the degree show and what I wanted my project to be, I redrew them all to what I imagined they could look like as finished pieces. In a sense, final concepts.

I was using watercolour, as I wanted a certain density as well as a transparency to the outcome. Knowing that the final images would have to be painted on MDF was a bit worrying because I knew they weren’t going to come out looking the same. I could visualise the changes to an extent but I still couldn’t fully anticipate the outcome. 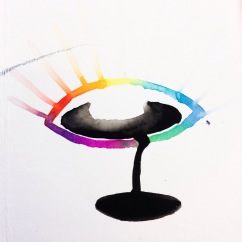 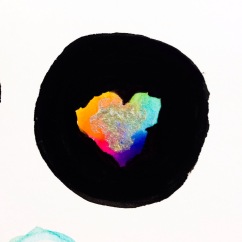 At first I wanted to represent the idea that the bubbleverse was in fact all the particles of the body of the primordial creator god. I ended up drawing this guy thinking, I shouldn’t limit myself to a strictly human body shape, even if it’s massively simplified. if it’s an entity of unfathomable dimensions then I can just let my mind go crazy and see what comes out.

I was especially pleased with the watercolours I was using at the time because I was getting bright and vivid colours, even when diluted. I had the thought to add the heart as a transparency to the great emotion which drives this being, out on display like an emblem but also a core part of the being itself.

Unfortunately I drew this being for no reason – I had already decided to discard the rainbow creator and replace it with the mirror creator. The whole idea that god created us in his image, that we are god and god is us… and most importantly- the self-reflection in the context of the universal genesis.

Further on, if I decide to continue my work on the project, I will definitely find a use for this concept drawing. Not just yet though. 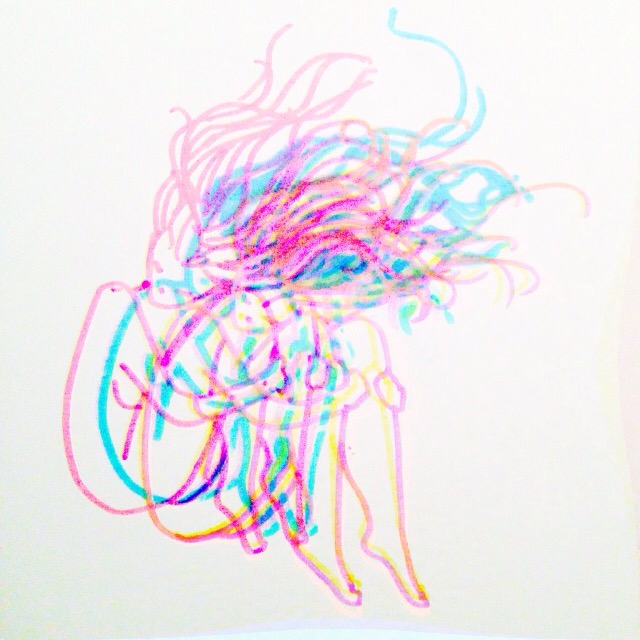 frequencies has a lot to do with the dream-themed images I’ve been doing for the exhibition in Bristol (Within/Without). I like to think that when we dream all our frequencies are in tune so this is about them coming together slowly and all at once.

distortion comes from the same headspace but that has more to do with my final project for the degree show at the end of the year. In trying to figure out how to represent the god/consciousness that created our world I thought to experiment with the ‘blank TV screen’ visuals – that black and white distortion which is in constant motion that I once heard was in fact frequencies emitted from the Big Bang.

I’m planning to turn those into prints to have at the show, so if you like what you see, you know where to look :)

Even though most people in the upcoming show in Bristol have decided to exhibit work they’ve been doing on their final uni projects, I decided to do something different, which I’ve been looking an excuse to do for quite a while now.

After having an almost overwhelming number of mad vivid dreams, I thought it would be really interesting to see how they look on paper. What you see below are development images, which I won’t be displaying but which I still find quite captivating.

Trying to portray the magical side of the very action of dreaming was a bit of a mind twisting endeavour so I decided to step away from the dreamer and focus on the dream itself. The sketch below was inspired by the ending bits of a dream I had, where after a mad party everyone went down to the beach, some of us surfing while those who couldn’t were just swimming about and splashing each other. I remember the sea crystal clear, almost mirroring the sky, the sunrise on one side, and the massive planet on the other. I couldn’t tell if it was light or dark because the moment in my mind was in the exact middle between night and day. 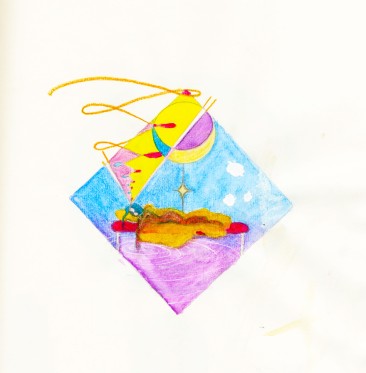 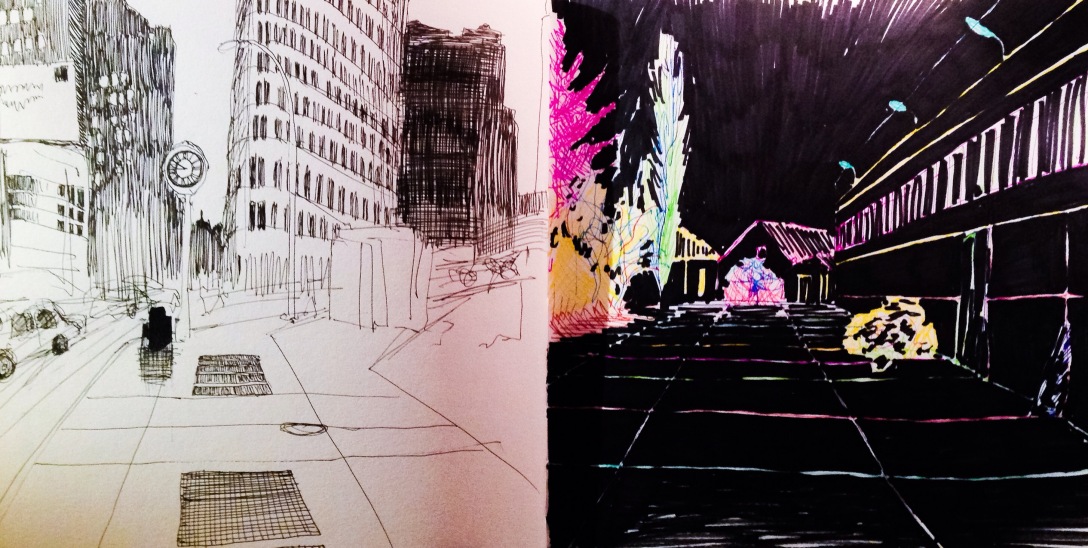 Wouldn’t it be interesting, I thought to myself, if dreams were just reality inverted.

I’ve been experimenting with inversion as a way to differentiate between drawings of ‘reality’ and drawings of ‘dreams’.

The piece below was a quick way to distract my overloaded mind so I could focus on my project better. Even though I was coming up with ideas around those two cityscapes, they are mainly an experiment, as this time I was directly drawing the inverted piece, rather than inverting it with photoshop.

So when I came back to my project, I felt it was lacking something. Perhaps my perspective needed to be shifted. And it did.

I realised i’d been focusing on the idea of the creation of this world, this universe, without considering an idea which has recently been raising a lot of uproar in the world of science – the concept of a multiverse.

I was reading an article about a ‘wormhole’, a seemingly empty spot on the edge of the observable universe, which seemed to be emitting some form of energy seemingly from nowhere. This was what led some scientists to the idea that our universe may be one of many which, like connected bubbles, could influence one another, and that phenomenon could be the proof of that theory.

I found this idea fascinating and decided to add the concept of a bubbly multiverse at the very beginning of the animation piece I’m planning. I wanted to see them breathe, shrinking and expanding, moving together, flowing with and according to one another; I wanted to see the multiverse come to life and I started doing some small scale experiments with watercolour. 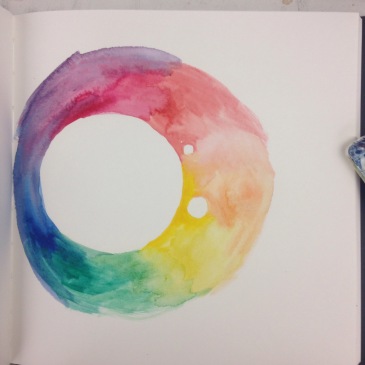 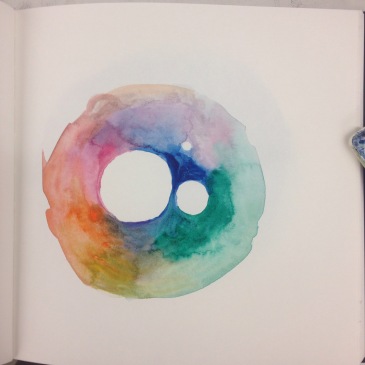 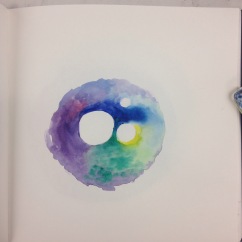 I thought it would be interesting to see what happens when I use glitch editing, and I’m actually really pleased with the result. Apart from the visual appeal, it could be a reference to the idea of an inter-dimensional distortion. If we come from a universe which is contained within this multiverse – perhaps our idea of the level above (the multiverse) would be distorted by the limits of our cognitive capacity and perception.

I wanted to continue trying out ways to use the marks more abstractly, without the ideas of male and female, but as a singularity.

The studies below are experiments with black and white and line. You need to feel the chaos, to create the chaos. So I created some dark infinite chaos, hoping to find the perfect way to represent the ideas in the right way.

In a way, they all work, but in a way neither of them does. The search continues. I think these will definitely be important at some point. At the moment they are more of a spin off of the main idea.

I’m eager to see what happens next time I sit down and draw. 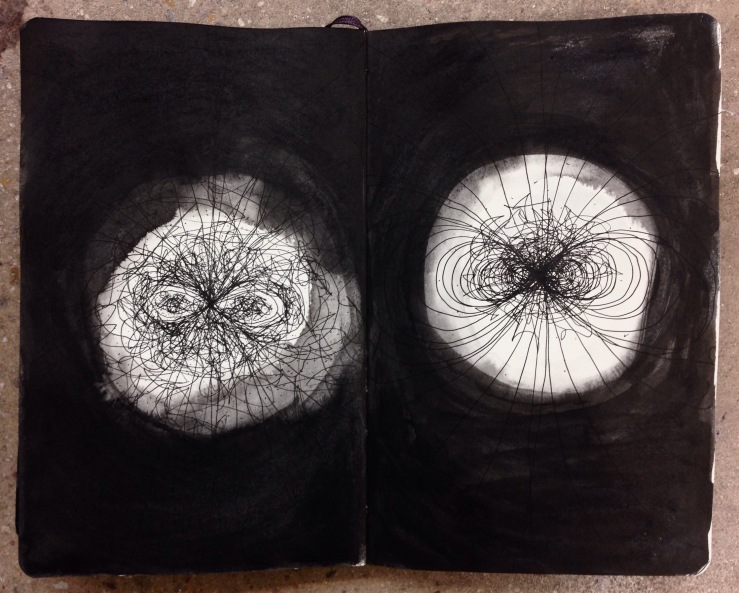 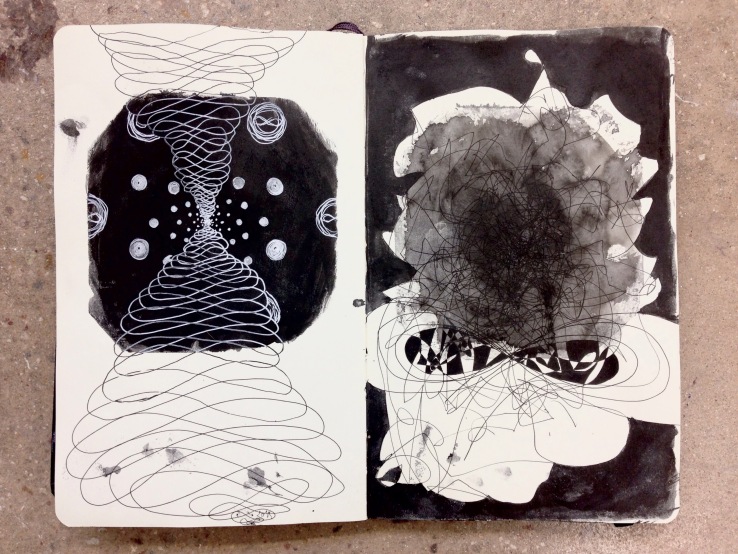 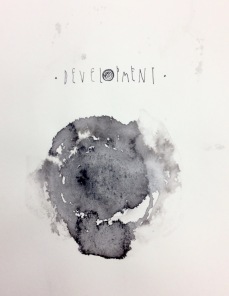 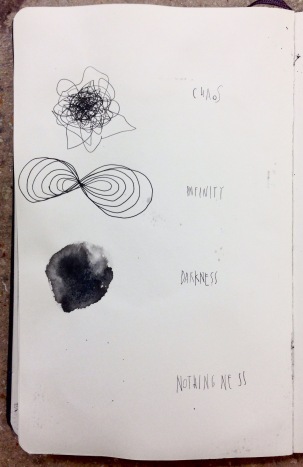 I wanted to do some more definitive studies and finalised images…

There’s a small dictionary of marks I made after I did the drawings, not for any particular reason.

I’m really pleased with these, and I think I’ll try some other geometric arrangements, go on a bigger scale – use A2 and A1 sheets of paper to illustrate all of them together… Then quickly move over to incorporating those concepts in the contexts of different myths.

After finishing the Ogdoad study, I thought that the ‘infinity’ couple looked a bit odd. So I decided to sit down and actually consider how to incorporate the symbol for infinity into a feminine and a masculine shape.

I really liked the idea of the infinity  symbol incorporated into a spiral (below, right) so it became a single line infinitely spiralling outward. I tried filling the male and female with it but I didn’t think it was representative enough (below, left) and went on doing the spiral, and when I twisted the top, it looked like a head, so I went on with a few more little versions of it (small sketches, right).

I found my shapes.